Straw bale construction uses baled straw from wheat, oats, barley, rye, rice and others in walls covered by earthen or lime stucco (some use cement stucco, but we typically don’t suggest it). Straw bale are traditionally a waste product which farmers do not till under the soil, but do sell as animal bedding or landscape supply due to their durable nature. In many areas of the country, it is also burned, causing severe air quality problems. It is important to recognize that straw is the dry plant material or stalk left in the field after a plant has matured, been harvested for seed, and is no longer alive. Hay bales are made from short species of livestock feed grass that is green/alive and are not suitable for this application. Hay is also typically twice the price of straw.

This technique for constructing walls has been recently revived as a low cost alternative for building highly insulating walls. The technique was practiced in the plains states in the latter 1800’s and early 1900’s. Many of the early structures are still standing and being used. The technique has been applied to homes, farm buildings, schools, commercial buildings, churches, community centers, government buildings, airplane hangars, well houses, and more.

Straw is also being used as a building material currently in sheet materials such as sheathing and wall panels. However, the approach of using bales directly, despite its history, is a new technique from a regulatory standpoint. In the 1990s a number of cities passed a straw bale construction building code, followed by the state of California. We expect to see straw bale codes adopted in coming years.

Building walls with straw bales can be accomplished with unskilled labor, and the low costs of the bales make this technique economically attractive. However, it is important to realize that the cost of straw bales will differ depending on what time of year they are harvested and how far they need to be transported. They are cheaper at the time of harvest rather than after they have been stored from the previous season and, of course, cheaper if they are transported shorter distances. Bales must also be protected from getting wet. Costs also begin to rise when one considers the type of stucco and its application. An earthen plaster taken from site soil, applied by the owner/builder, and maintained by the owner is quite inexpensive, but may take a long time to apply. A cement stucco applied by a contractor is accomplished quickly and lasts a very long time without any maintenance, but also costs money. As with any style of construction, the more labor input by the owner and the less by the contractor, the less costly it will be.

Experimentation with straw bale construction continues. A good deal of standardization and refinement in regard to techniques, tools, and associated materials is now appearing.

Straw is plentiful in many locations. However, distribution systems are not developed for straw to be used construction.

This can be one of the most economical wall systems. Houses have been constructed for as low cost per square foot (floor area) for very basic accomodations to high end homes at well over $100.00 per square foot.

Building code acceptance will be key to obtaining conventional financing.

The appearance of a completed straw bale structure is similar to a southwestern adobe style building. This look is generally positively viewed . There will be hesitation among mainstream buyers to this technique at first since it is new and unusual. Significant interest in this type of construction exists in our region, although the adobe style is not typical for this area.

Any unusual building technology must be evaluated by the code enforcement authorities before approval can be granted. This is typically done by review of another code agency’s approval or position on the technology or by review of test data supplied by a reputable independent laboratory. In the case of straw bale construction, there are precedents of approval in other jurisdictions. Anyone wishing to receive approval in Austin should follow the local straw bale construction code. The inspections department in other areas can refer to the Green Building Program for locations of precedents from our as well as other building inspection departments.

There are numerous examples of this construction in the Austin regulatory jurisdiction and in the greater Austin area at this time. If test data is needed, the building inspection officials will indicate what is needed. Testing is currently being done in Arizona, California and New Mexico.

At this time, there are also a number of insurance companies and lending institutions in the Austin area that have given their approval to straw bale construction.

Straw bale construction exhibits R values from R-30 and up to R-45. The bales are typically covered with concrete mortar/stucco or earthen/lime plaster, achieving a high degree of fire resistance.

Two hundred million tons of straw are burned annually in the US. The stability and lack of weathering in straw is not desirable in agriculture but quite desirable in construction.

Straw in straw bale structures has not shown evidence of termite infestations.

Bales may be anchored to each other for stability while under construction using stakes of wood (1×2×36), rebar (#3 or #4) or bamboo that penetrate at least two bales. Another less popular method uses mortar or clay between bales. A new method uses bamboo (or similar) stakes on both sides of the bales, tied with wire or twine, “corsetting” the bales. Such anchoring is generally accepted to be primarily necessary to keep walls from toppling during construction; well applied plaster will usually provide sufficient stability once complete – though by that time, whatever pinning method was used is embedded in the walls.

Bales can be used flat or on edge. They are best used flat for structural purposes. Plaster will also “key” into the ends of the straw when bales are laid flat, whereas bales on edge will have the long length of the straw on the wall surface, providing a weaker bond between the plaster and bale.

Bales should be firm and strung tightly with either baling wire or twine. Half bales and whole bales are needed so the bales are staggered when stacked.

A timber frame construction (or steel or concrete) can use bales as infill. The frame adds to the expense in materials and in labor for constructing it and then working around the frame with the bales. However, this approach will be more readily received by building officials.

Window and door frames and headers can be made from wood. Windows and doors are typically accentuated towards the interior or (less preferable) exterior of the opening creating a deep well. Care is needed to if creating a deep well on the exterior to avoid water entering or collecting in these areas. Windows tend to be a point of failure due to water invasion, so they must be detailed carefully.

A wood plate or concrete beam (or bond beam) is placed on top of the wall. Trusses or roof framing can be set on this. A threaded bar can penetrate through the top bales and be fastened to the plate or beam for added roof stability

Poultry netting can be mounted on both sides of the walls for plastering, though it is no longer considered mandatory by many bale builders. Stucco lath is used around windows, doors, and corners for added strength. The wire netting and lath are typically held against the bales by wire ties through the bales or “U” shaped pins into the bales.

Utilities can be laid in the walls as they are built, laid against the bales after the walls are built or run in moldings, interior walls, under floors, or in the attic.

Structural/Load Bearing, or “Nebraska Style,” straw bale construction requires that the bales sit for a short period of time to complete any settling before stucco is added, or that the walls be mechanically pre-compressed. If the bales are firm, there will be very little settling (typically less than 1 inch). A wire tie-down system which is connected to the foundation and the top plate, application of downward pressure using a front end loader bucket or similar, or any of a number of other techniques have the ability to firm up the wall and compress it to compensate for any settling concerns.

Approximately 10,000 acres of wheat and oats are harvested in the Travis County region each year. Eight to ten acres can supply sufficient straw to build a small house.

The best time to obtain straw is at harvest time, May through June in central Texas.

More details are becoming available for working with straw bales. See the General Assistance listings in the Resources in the right column. Thorough research is recommended prior to using straw bales for construction.

Add YOUR company to the Resource list on this page… 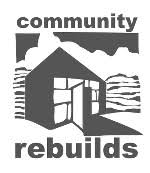